Virginia, known as the Old Dominion State, is ranked #16 in total number of CRNA Schools in the United States.  It shares the #16 CRNA School ranking with Maryland, Massachusetts, South Carolina, New Jersey as well as several other States.  There are numerous established colleges and universities situated throughout Virginia State, including cities as Norfolk and Richmond, and CRNA Schools in Virginia are no exception.  CRNA students appreciate the nature throughout the State – from the majestic Appalachian Mountains all the way to the miles of coastline along the Chesapeake Bay.  These are just some of the things that make nurse anesthetist programs in Virginia unique.

Virginia has approved legislation to be part of the RN Compact States agreement and this should be implemented in 2021.  This means RN nurses are able to move around freely and work within all 33 approved multi-license states.  However, it’s important to note that there is no such APRN Compact for nurse anesthetists yet though this may change in the future.  This is something that is important when people consider CRNA Schools in VA.

There are two CRNA Schools in Virginia located in the cities of Norfolk and Richmond as shown below:

All CRNA programs in VA are 3-year doctorate degrees.  Master of Nursing in Anesthesia degrees are no longer available in Virginia.  VCU offers an incredibly unique program with a didactic curriculum at distance sites across Virginia.  Students in Southwest Virginia (Abingdon), Roanoke, and Northern Virginia (Alexandria) are all able to learn together with the core Richmond class through video conferencing and web-based lessons.  By doing this, the school was able to increase the class size to 44 students with the Richmond campus being the largest.  Overall, the acceptance rate is 24% at the VCU CRNA Program.

Meanwhile, Old Dominion University CRNA is a boutique program not as well known, especially outside VA.  Although the class size last year was 15 students, the graduating class size in 2018 was only 8 students.  With that in mind, nevertheless, the Old Dominion graduate employment has consistently been 100% in the past decade and acceptance rates are at 50%.  Therefore, this may be an excellent choice of school for those who may be concerned about being accepted into a CRNA school. 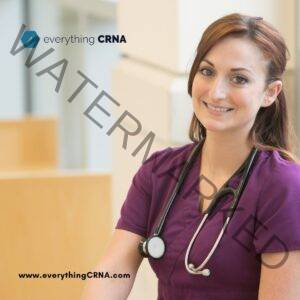 Please see the list below for the best CRNA schools in Virginia. 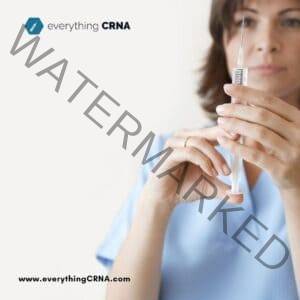 Whether you’re looking to apply to CRNA programs in Virginia or already a CRNA, check out CRNA Salary in Virginia and Virginia Board of Nursing to learn more about nurse anesthesia in the State.

With two CRNA schools in Virginia, you may also be interested in applying to CRNA programs nearby in other States.  The States that have nurse anesthetist schools include: 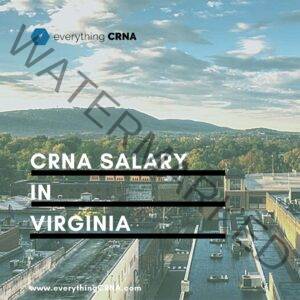 Since you’re reading about CRNA Schools in Virginia, we thought you might be interested in learning about the CRNA Salary in Virginia if you’re going to work in the State.  Be sure to also check out our CRNA Salary Guide and CRNA Starting Salary if you’re still a student or if you’re wondering how much a fresh CRNA can make right out of nurse anesthesia school.  Different States have different demand and supply economics of nurse anesthetists, so my advice is to be sure to read up on different states to see which ones fit you best.

In summary, Virginia is an attractive state to study nurse anesthesia.  CRNA Schools in Virginia offer the combination of flexibility in addition to an extraordinarily strong job market for nurse anesthetists upon graduation.  Pursuing a CRNA program in Virginia will also make sense if you plan on staying within the State after graduation.  This is because it is common that a SRNA nurse can find nurse anesthetist jobs within the same State easier than students from out of State upon finishing school.

Did you graduate from one of the CRNA Schools in Virginia?  Please let us know what you thought of the programs and experience working with the graduates. Click on the image gallery below for more information on nurse anesthetist schools in VA.